You are here: Home / Events / The romantic Valentine’s Day menu 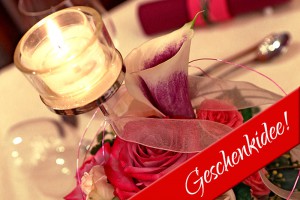 It has long been a beautiful custom in this country that 14 February belongs to love and lovers as Valentine’s Day. But love often goes strange ways: Did you know, for example, that Valentine’s Day celebrated its debut in England as early as 1383, from where it was first exported to America and only brought to Germany by US soldiers after 1945?

Well, actually there was a commemoration day for Valentinus already in 469, but at that time it had to do with early Christian conflicts and thus rather a less beautiful occasion. But in 1383 the English writer Geoffrey Chaucer put the matter right when he recited a poem at the court of King Richard II on 14 February, in which it was about how birds gathered around the goddess Nature on that very day so that everyone would find a partner. From then on, couples of Valentines were also formed in England in the genus Man, who sent each other gifts or poems. English emigrants later took the Valentine custom with them into the New World, and from there it returned in the GI baggage as Valentine’s Day to good old Central Europe in Germany – albeit a few hundred years later.

But nowhere is it written that Valentine’s Day must always be flowers. And so in Japan on 14 February there is chocolate, in Italy castles of love, and in Finland simply Valentine’s cards. For the sake of our Franconian idiosyncrasy, we cultivate a very individual custom and celebrate Valentine’s Day with a romantic 3-course menu at festively set tables.

Because these cookies are strictly necessary to deliver the website, refuseing them will have impact how our site functions. You always can block or delete cookies by changing your browser settings and force blocking all cookies on this website. But this will always prompt you to accept/refuse cookies when revisiting our site.

We fully respect if you want to refuse cookies but to avoid asking you again and again kindly allow us to store a cookie for that. You are free to opt out any time or opt in for other cookies to get a better experience. If you refuse cookies we will remove all set cookies in our domain.

We provide you with a list of stored cookies on your computer in our domain so you can check what we stored. Due to security reasons we are not able to show or modify cookies from other domains. You can check these in your browser security settings.

If you do not want that we track your visist to our site you can disable tracking in your browser here:

We also use different external services like Google Webfonts, Google Maps, and external Video providers. Since these providers may collect personal data like your IP address we allow you to block them here. Please be aware that this might heavily reduce the functionality and appearance of our site. Changes will take effect once you reload the page.